We would like to show you how the local area will be arranged, where residents will play with children, drink coffee in the fresh air and what places in the yard will become instazons.

Colored cubes at the entrance to the complex, steam fountains, an area with a pond and an amphitheater, a wave-shaped bench that will become one of the art objects of the courtyard - such announcements are enough to understand that even in the landscaping of the KANDINSKY Odessa Residence we focus on the avant-garde style Wassily Kandinsky. 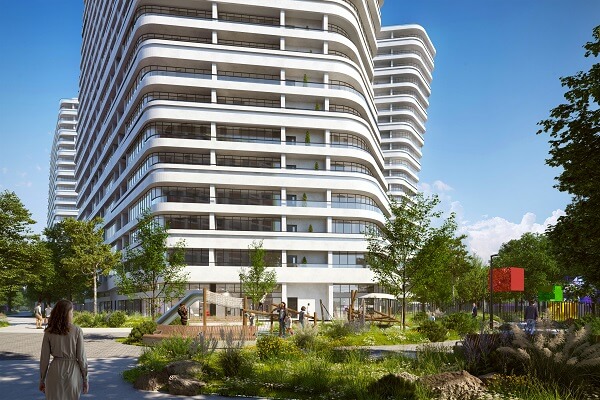 Let`s start with the park, as residents will be the first to meet it, entering the territory of the KANDINSKY Odessa Residence. In front of the houses on the side of French Boulevard is the Brun dacha. We keep the existing values ​​of this space: two houses of the architect Felix Gonsiorovsky, mature trees next to them and equip a park - an open space with places for rest and lighting. According to the improvement project, the concept of which was developed by the designers of the Kotsiuba studio, there will also be a guest parking. It will be placed between the landscaping of the boulevard and the square. 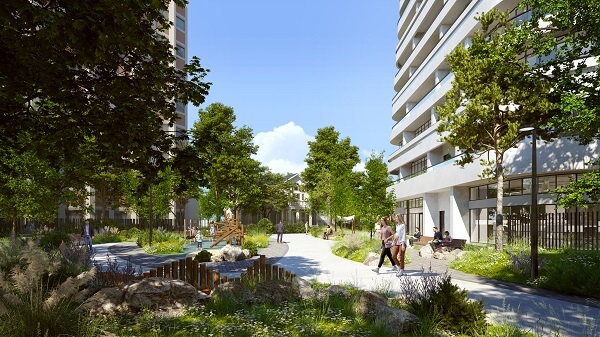 Since cafes, restaurants and shops will operate on the ground floors, everyone will be able to visit the space between the houses. We are against total closure and believe that retail spots should be in proper demand and be able to develop.

We will divide the entire area of ​​public space into separate functional zones:

in the center of the courtyard we will equip an active square with a pond, steam fountains with colored lighting and an amphitheater staircase that will route to the roof of the restaurant,
next to the cafe, we will set aside space for summer grounds, so that in the warm season you can have breakfast or lunch outdoors,
we will plant trees in the park and set benches,
we will pave paths from the entrance, which will become a separate area for the promenade.

The decoration of the public space is colored decorative cubes. They will be at different distances from each other and in the future they will have the shape of an arch. Entering the territory of the KANDINSKY Odessa Residence and going further to the cubes, it will seem that they disintegrate into separate fragments and soar in the air

Another piece of art will be a wavy bench. The designers were also inspired to create it by paintings by Wassily Kandinsky.

The public space will be closed from cars. For them, underground and surface guest parking is provided. 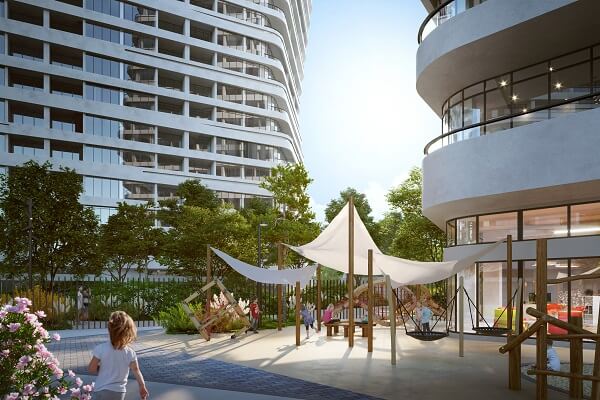 The courtyard is a private territory of residents, so it will be closed to outsiders. But we will not install high and solid fences, instead of them we have chosen transparent fences. Their elements are arranged in the form of dotted lines, so they let light and air through, do not block the view from the yard, and at the same time make the space safe.

In each courtyard, we will install bicycle parking, plant trees, bushes and grass, and equip playgrounds. Four houses - four playgrounds. Each has its own topic:

forest - an area with dense conifers. Here, the landscape becomes a play element, deepens into the world of fantasy and creates a forest atmosphere for thematic and role-playing games.
beach area - here the game will take place on the border of two imaginary elements: sandy space and moving water.
creative playground - a play area where you can draw, sculpt, play on special acoustic instruments.
active one - a playground where little residents can run, jump, slide and climb. The play equipment here will fully correspond to the theme of this children`s area. 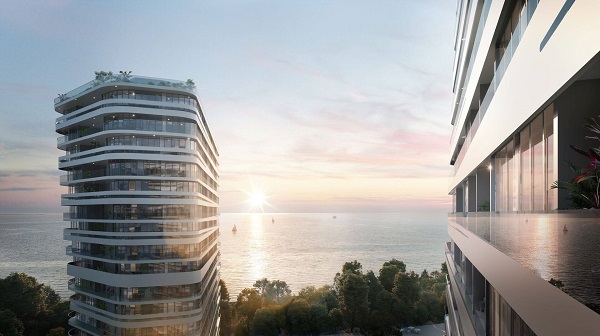 From the apartments to the sea - just 5 minutes walk. Residents and guests of the KANDINSKY Odessa Residence can go to the beach by going down the elevator and going through the Tunnel of Fairy Tales.

As part of the improvement of the local area, we will resume the work of the public elevator, which stopped working several years ago, and will restore the mosaic of the famous fairy tales in the city. We want the KANDINSKY Odessa Residence to have convenient access to the sea. 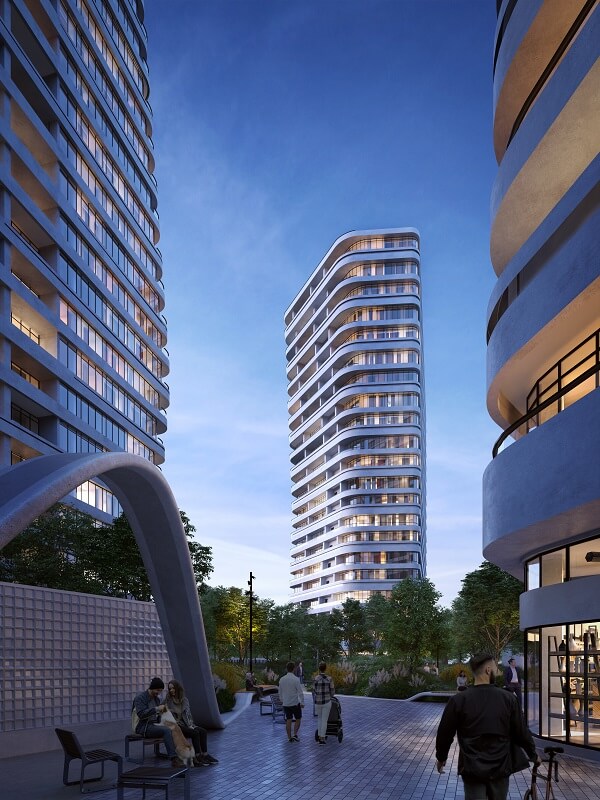 Filling the space with greenery is one of our requests, which the landscape architecture studio has fulfilled 100%. The designers have chosen an original way of landscaping the local area. They divided the adjoining space according to the seasons and assigned their own plants for each season.

Black pine, Evereste apple, cochineal oak, heptacodium, davidia and deutia are the plants chosen for the winter part. In the spring zone, Norway maple and witch hazel, Rudolph apple, Schmitt, Red Shine and Sunset Boulevard cherry will bloom. Irga Lamarca, zelkova, black pine and European cercis will be planted in the public space, which the designers have designated as summer. Field maple, Gordovina viburnum, euonymus and maple will grow in the autumn zone. 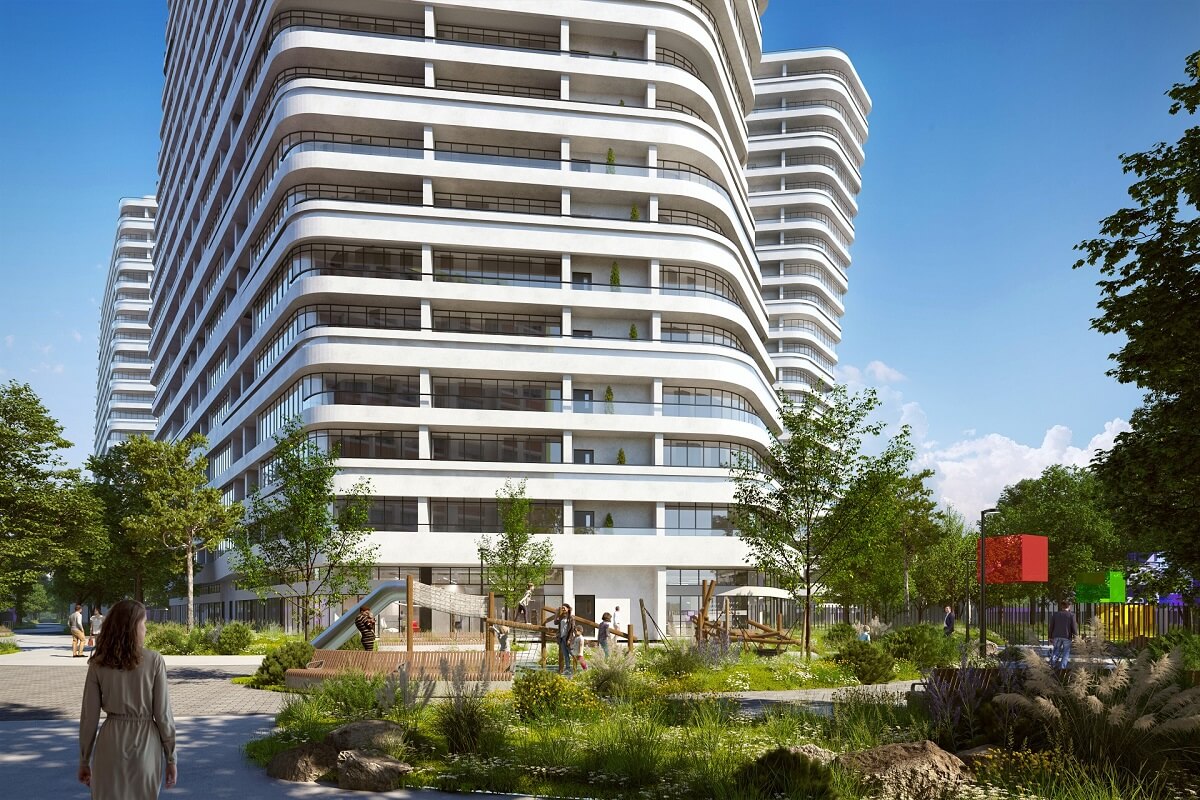 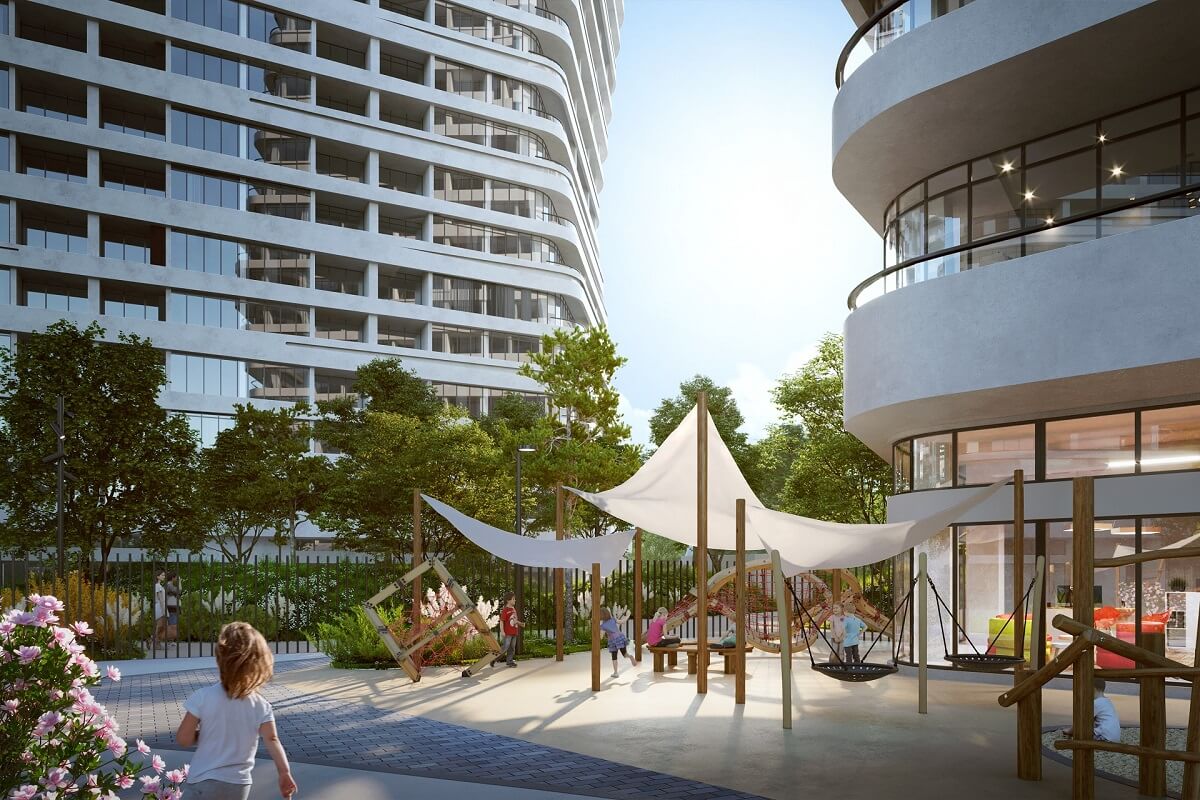 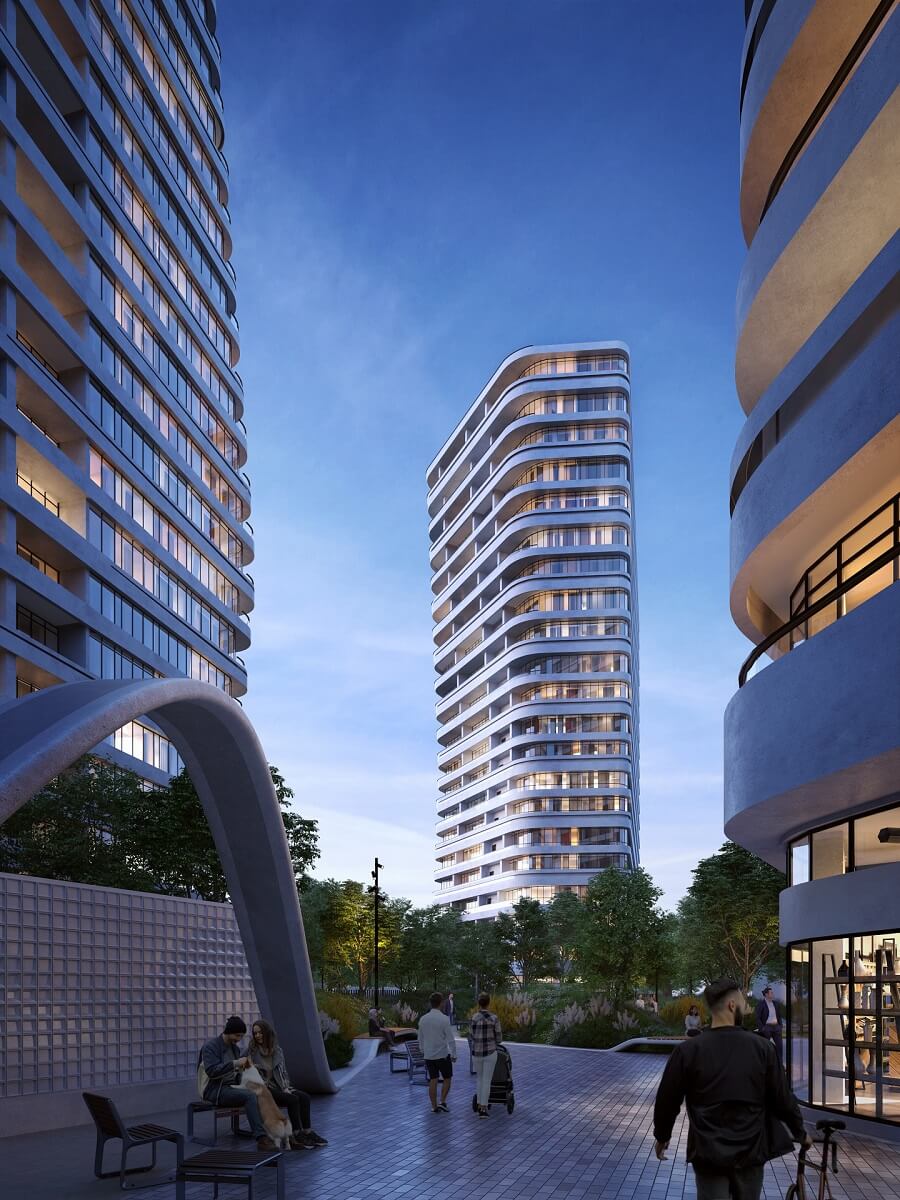